Flamboyant aerobics personality Richard Simmons appeared in a memorable episode of Whose Line.

Having one of the more notable guest appearances, Richard Simmons was involved somewhat in every game (the first two just being allusions to his appearance). Wayne Brady sang a disco song to him in Song Styles, for instance. 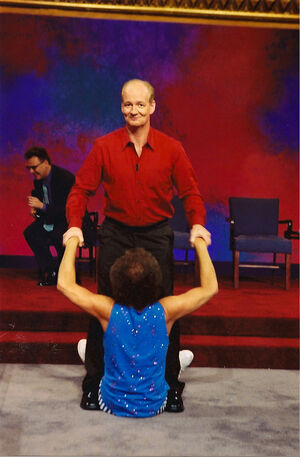 He also was a prop in a raunchy game of Living Scenery, and took the role of an audience member, along with Drew Carey, in a game of Moving People.

Whose Line frequently used feigned gayness a source of easy laughs, to the point where Drew Carey actually had to announce that Ryan and Colin were, "not a couple." Richard Simmons was probably expected to maintain his public persona as a basically asexual personality. Instead, he acted leering and libidinous, especially toward Wayne, who actually curled up in his chair in a fetal position after one game. The reactions of Ryan Stiles especially betrayed a feeling of, "This is not what we expected."

The audience and Drew ate it up.

Community content is available under CC-BY-SA unless otherwise noted.
Advertisement